When Gwan Yin Bodhisattva will become a Buddha 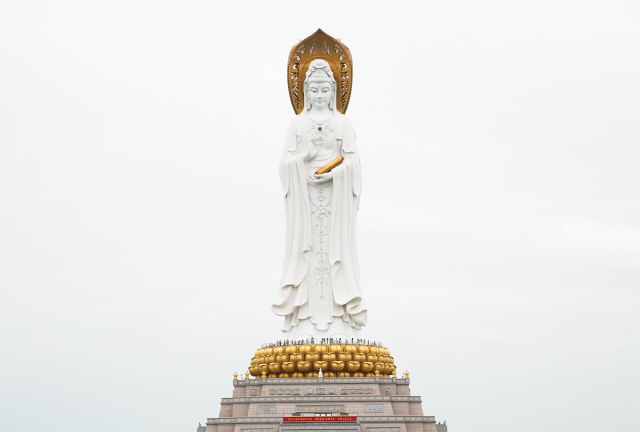 When Gwan Yin Bodhisattva will Become a Buddha

Flower Virtue Store Bodhisattva asked the Buddha, “World-Honored One, I pray that You will explain to us, to enable innumerable sentient beings to receive great benefits.

If the World-Honored One will tell this Bodhisattva’s original vows, then other Bodhisattvas, having heard his vows, will definitely train themselves to fulfill them.”

The Buddha replied, “Very good! Hearken! I will tell you.”

“Yes, I would be delighted to hear.”

“Good man, although Amitābha Buddha’s lifespan will last innumerable hundreds, thousands, and koṭis of kalpas, it will finally come to an end. Good man, after incalculable distant kalpas to come, Amitābha Buddha will enter parinirvāṇa.

“After His parinirvāṇa, the true Dharma will continue for as long as His lifespan. The number of sentient beings that will be delivered will equal that during His life.

“After Amitābha’s parinirvāṇa, some sentient beings there will not be able to see a Buddha. However, Bodhisattvas who have attained the Thinking-of-Buddhas Samādhi will constantly see Amitābha Buddha.

“Furthermore, good man, after His parinirvāṇa, all the precious things, such as bathing ponds, lotus flowers, and jeweled trees in lines, will continue to sound Dharma tones, in the same way as during that Buddha’s life.

“Good man, [the night] Amitābha Buddha’s true Dharma ends, after the midnight period, when the dawn breaks, Avalokiteśvara Bodhisattva, seated cross-legged under the bodhi tree made of the seven treasures, will attain anuttara-samyak-saṁbodhi.

“He will be called Universal Radiance Virtue Mountain King, the Tathāgata, Arhat, Samyak-Saṁbuddha, Knowledge and Action Perfected, Sugata, Understanding the World, Unsurpassed One, Tamer of Men, Teacher to Gods and Humans, Buddha the World-Honored One.

“His Buddha Land will be naturally made of the seven treasures. Even in kalpas as numerous as the sands of the Ganges, Buddha-Bhagavāns will not be able to finish describing its splendors.

“The names ‘voice-hearers’ and ‘Pratyekabuddhas’ will be nonexistent in that Buddha’s land. Only Bodhisattvas will fill His land.”

A new Name for the Land of Ultimate Bliss/Sukhavati

Flower Virtue Store Bodhisattva asked the Buddha, “World-Honored One, will that Buddha’s land still be called Peace and Bliss?”

The Buddha replied, “Good man, that Buddha’s land will be called Adorned with Gathering of Multitudinous Treasures.

“Good man, until His parinirvāṇa, Universal Radiance Virtue Mountain King Tathāgata will be attended personally by Great Might Arrived Bodhisattva and will receive his offerings.

He will be called Well Established Virtue Treasure King, the Tathāgata, Arhat, Samyak-Saṁbuddha, Knowledge and Action Perfected, Sugata, Understanding the World, Unsurpassed One, Tamer of Men, Teacher to Gods and Humans, Buddha the World-Honored One. His land, His radiance, His lifespan, His Bodhisattvas, and even the duration of His Dharma will be just like those of Universal Radiance Virtue Mountain King Tathāgata.

The Benefits of Hearing These Buddhas Names

“If, among good men and good women, there are those who have heard the name Well Established Virtue Treasure King Tathāgata, they will not regress from their resolve to attain anuttara-samyak-saṁbodhi.

“Moreover, good man, if there are good women who have heard the names of:

they will not assume the female form again, and their sins which would entail forty koṭi kalpas of birth and death will be expunged. They will never regress from their resolve to attain anuttara-samyak-saṁbodhi. They will see Buddhas, hear and accept the true Dharma, and make offerings to Saṅghas. In a life after the present one, they will be able to renounce family life, command unimpeded eloquence, and quickly acquire the retention of all dharmas.”

Source:  Sutra of the Prophecy Bestowed Upon Avalokitesvara Bodhisattva